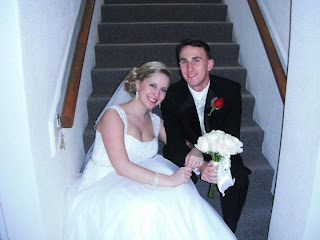 Ladies and Gentlemen, we have a winner for the Best Love Story Contest, with sponsors Sharilyn Wells Photography, Chrissy's Creative Creations & Pure Romance by DeAnna! Our lucky couple is Andrew and Jessica Peck! Here's their story! (Photo courtesy of the Peck family).

Andrew and Jessica caught the sponsors’ attention when their love story started with:

Puts a smile on your face doesn’t it? We all remember our awkward middle school phase that, for some, might have went into our high school years.

Andrew and Jessica became each other’s first boyfriend and girlfriend in middle school when they lived in Lewisville, Texas in 1997.

“I guess it just wasn’t meant to be for us at the point in our young pre-teen lives because our relationship didn’t even last a month! I was heartbroken for the first time in my life,” wrote Jessica.

Fast forwarding to 2000, Jessica’s family relocated to west Texas where she admits she had her heart broken a couple more times. She graduated high school, started college, and eventually left in 2007 to take a job as a flight attendant with Continental Airlines.

“Andy had always crossed my mind and I would occasionally search for him on MySpace and Facebook on my layovers, but I never came up with a match. I was curious what he had done with his life and hoped one day that I would find him,” said Jessica.

During a layover in March of 2010, Jessica was looking through a girlfriend’s Facebook page and noticed that she had recently become friends with an Andy Peck. She immediately clicked on his profile.

“And there he was, the boy who stole my heart in the seventh grade,” wrote Jessica. “I sent him a friend request and not even 24 hours later, he had accepted and sent me a message.”

Their friendship began to blossom over a course of six months. And during Andy’s second deployment to Iraq, they decided to take a chance and started dating again.

“Our plan was to see each other when he got back from Iraq … it would be for the first time in 13 years! Our friends thought we were crazy, but what did we have to lose?” admitted Jessica.

They reunited in August of 2010 in the Houston airport and Jessica knew right at that moment that she was going to marry him.

“He must’ve known too because he proposed in September 2010 and we married December 2010,” wrote Jessica. “I love him today, yesterday, and every tomorrow.”

Congratulations to the couple and thank you for all the participation! Make sure to go by the sponsors fan pages and "like" them! Check out these goodies that the couple won! Not to mention ... a free couples session with yours truly!