Y'all ... this Elf on the Shelf thing is a big deal. It's a pain in my ass, but it's a big deal here. Why is it a pain? Because apparently once you do something REALLY cool with this elf, you can't do something lame. Yeah. Psh. What do you think about that? I'm constantly trying to figure out what this elf ... our elf is named Raheem, is going to do for 24 consecutive nights. Lemme tell ya, my favorite night (one that never changes in tradition) is the night he leave with Santa, the 24th of December. Hallelujah!  (Follow the links within this paragraph to see some of Raheem's shenanigans from past Christmases! *Orange Text*) 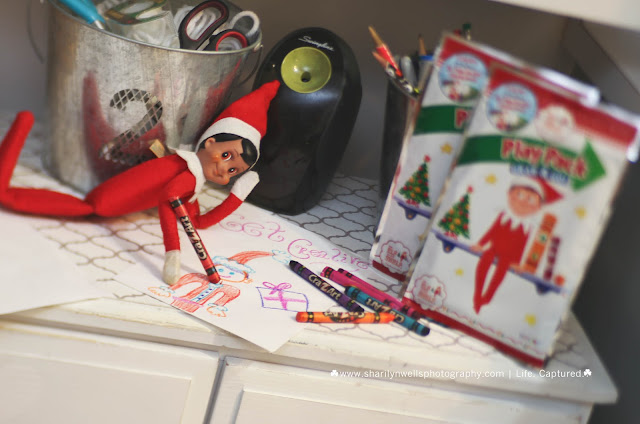 However, my dear friends, never fear I'm here to help you out. Every time I Pinterest search Elf ideas for that night I run into the issue of seeing all these cute ideas but they involve that other popular doll ... Barbie. Like, Barbie has everything so when you have a child that plays with Barbie, your Elf Shenanigans are pretty easy. She has tons of accessories to play with so then your Elf can temporarily play around with her Ferrari or her mansion. The Elf can also wear her clothes and pretend to have one of her hundreds of careers. I mean, sheesh, it's easy! Boys ... boys are more difficult in my humble opinion. 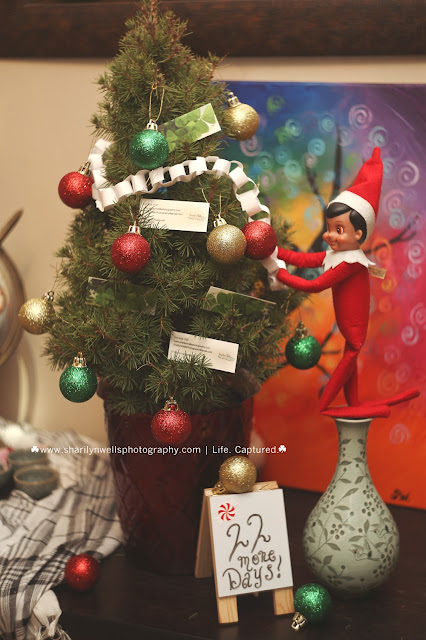 First of all, yes - boys have action figures. I get it ... but I mean, you really can't have GI Joe playing dress up with the Elf. I mean ... when you have a boy who is ALL boy, it'd seem pretty ridiculous. But also, how many times can you really have an Elf, who's supposed to be kind hearted and sweet play war with the green army men? One time and call it night ... I mean, I've got an 8 year old who's ADHD. The Elf really doesn't help with his behavior in the first place. Add the same type of shenanigans every night ... yeah... I'm going to have one bored little boy. 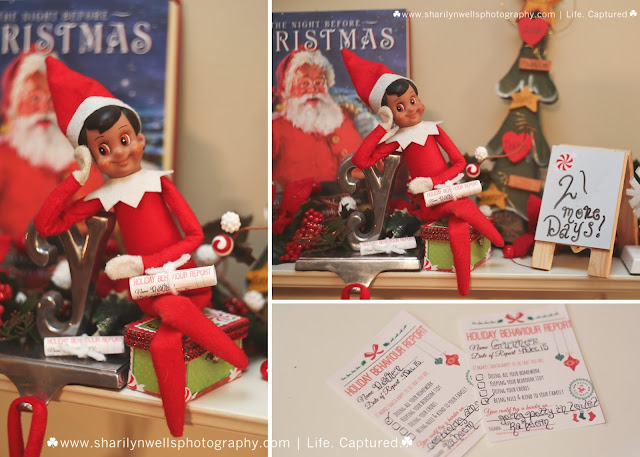 So, like I said before, every year has to have something better. Bigger. More extreme. And lemme tell ya, I myself am running outta ideas! 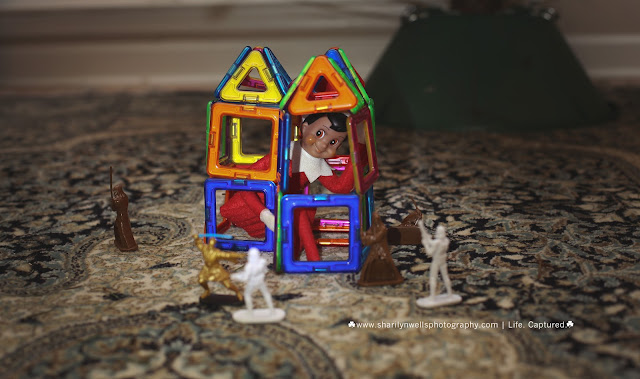 This year we started out in a sorta creepy way, cause well, I forgot that Raheem was supposed to show up on December 1st. So, while at school, Raheem tried to get into the house, but low and behold ... He forgot his keys. And get this, my 8 year old didn't see him until he went to put the dogs out and he nearly jumped outta his skin. (proud, giggly momma moment.)

We then began the shenanigans slowly by having him color and present the boys with their own Elf on the Shelf activity packs. (found them on the dollar bins of Target!)

Next night, Raheem decided to decorate our real tiny tree (since we hadn't received our real tree yet) ... and he also added some of momma's business cards. I mean shoot, the poor guy really didn't have much to work with as I wasn't in the holiday mood just yet!

Now we've been having behavior issues for a while and so the next night he decided to remind both boys on what should be done correctly to remain on the nice list. He presented them with behavior reports.

The following night? He ended up getting captured by Star Wars Stormtroopers and needed the Jedi to rescue him.... He's always getting himself into trouble. 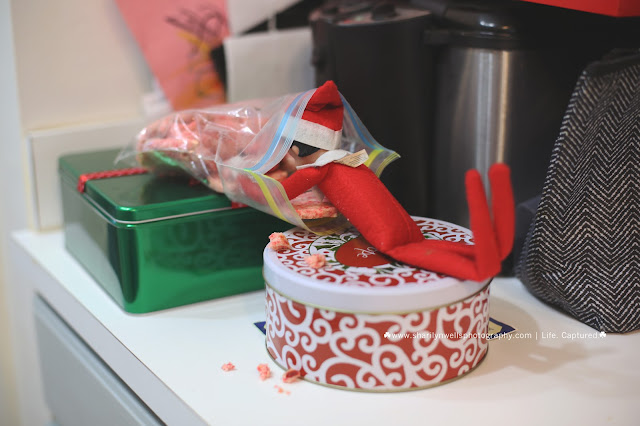 Here's where quick thinking has to come into play. The next night, momma was sooooo sick that she went to bed even before her littles did ... so she had to set an alarm to wake her in the middle of the night to move the damn elf. Yes ... I was THAT mom... So at midnight, I caught Raheem getting into the peppermint cookies. And I was back in bed within 3 minutes. 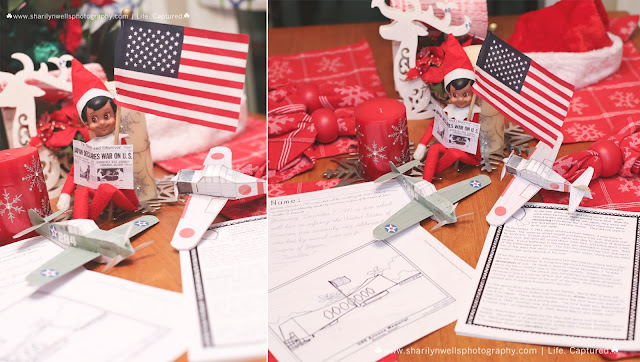 Okay, so for this one ... it actually took planning -- and about 1.5 hours worth of cutting, taping and cussing out those damn foldable planes. December 7th, "A day that will live in infamy." My boy is all about military and wars and the history. So why not have Raheem teach him about Pearl Harbor? I Googled free printable worksheets (from homeschool sites) about the history, worksheets about who was part of WWII and some coloring pages. And then you can't forget about those planes ... those damn planes. (click on links for a start of what Raheem left) ...

I also happened across our city's (well our Capital's) newspaper head line of that fateful day. Needless to say, the boy was excited. He even DID the worksheets and read and EVERYTHING. I guess the elf has to give him homework from now on! ;) 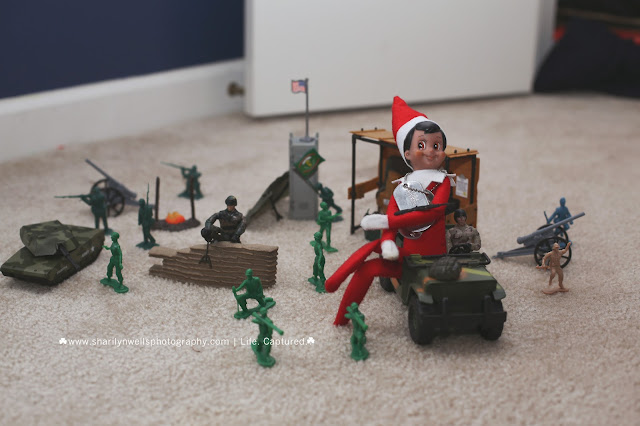 Continuing on with the spirit of "war" ... That next night, Raheem played Army with a mixture of GI Joes, green army men and some civil war guys. 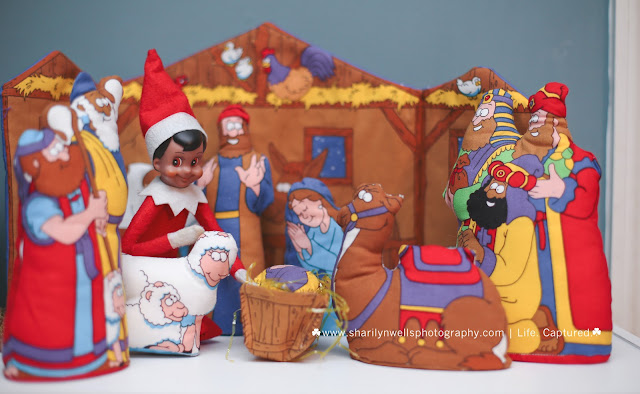 You also can't have fun with the Elf without at least him showing the boys the TRUE meaning of Christmas. My mother mad this plush nativity scene years ago for her Sunday School kids. We've inherited it and we LOVE it! 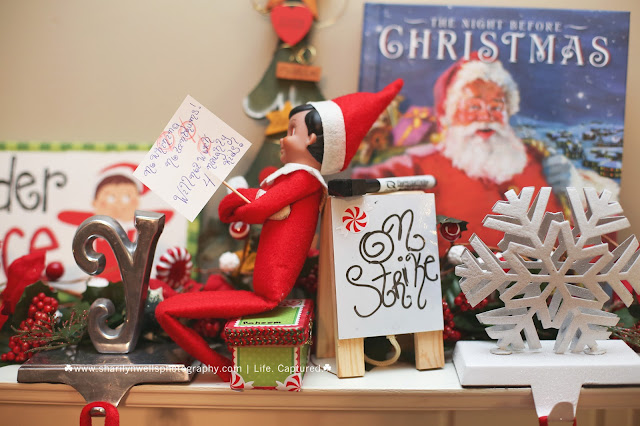 So .... You remember me saying we've been having behavior issues? Well ... Raheem noticed too. He went on Strike. For TWO DAYS! Then .... 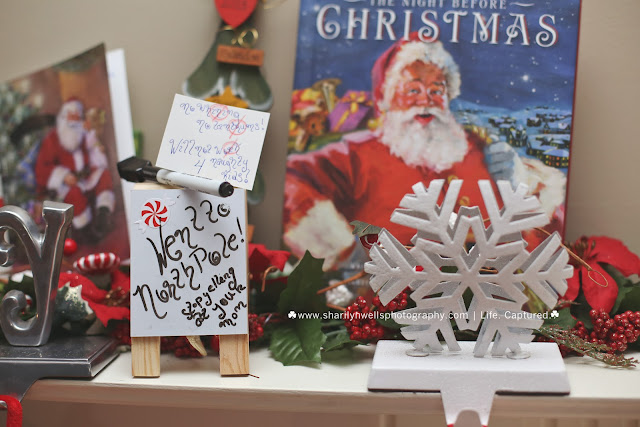 He left all together! He said, screw it ... packed his trunk up and left. 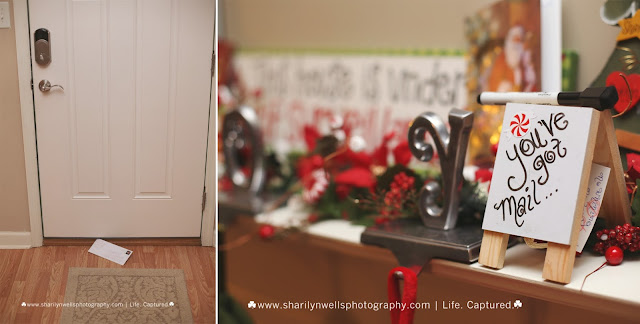 He DID send a letter from the North Pole to my son. It explained that his behavior was unexceptable and he was super close to being put on the naughty list. Raheem would not return unless he fixed his attitude. 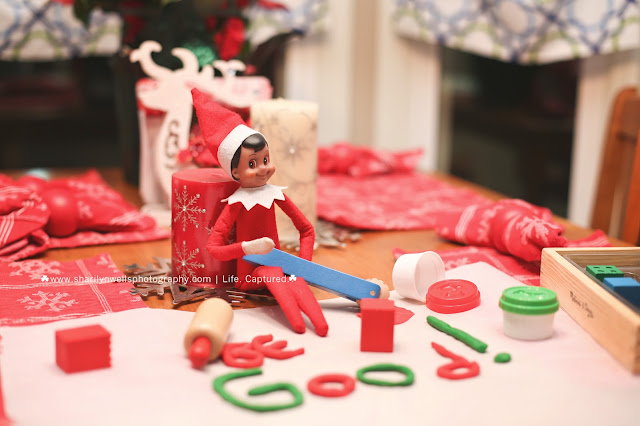 Low and behold ... he returned the next day and with PLAY DOH! But then .... he didn't move the next night ... We THINK the little boy got ahold of him as "Be Good" was more like "Eb Oodg" by the end of the day. So, we did the only thing we could think of -- We Googled how to get the Elf's magic back. And We discovered this Elf Recovery Kit. 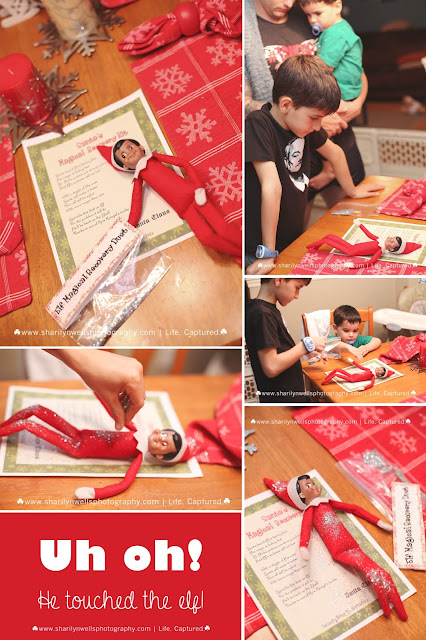 With crossed fingers, we did the kit and went to bed. 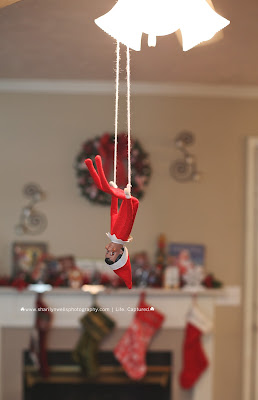 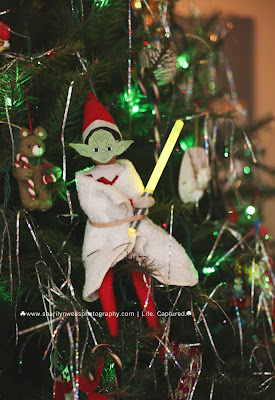 And it worked! Raheem was feeling FANTASTIC. I mean shoot, he was doing some Crossfit shit stuff and everything off the ceiling fan! AND THEN the next night? He was so excited about the new Star Wars movie coming out, he dressed up as Yoda!! WHAT?! How awesome is Raheem?! 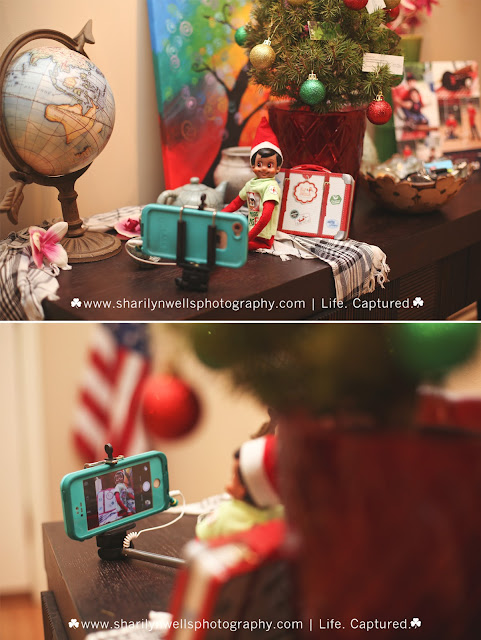 The next two nights, Raheem got his photography skills pumping. First he decided to take some selfies ... then the next night he was photographing the Ninja Turtles. 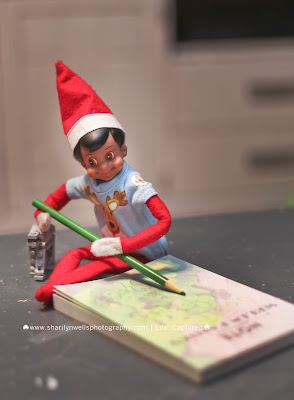 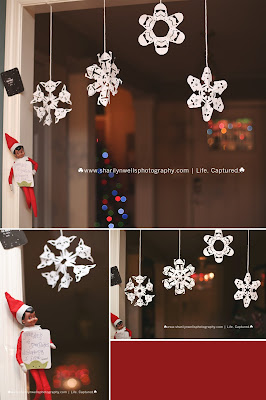 The next night wasn't as cool ... behavior was an issue again, so Raheem had to write a quick note to remind the 8 year old that Christmas was right around the corner. It must've worked because behavior was corrected and the following night, Raheem cut these awesome Star Wars themed snowflakes! He even played around and said that our lack of snowflakes was disturbing. LOL 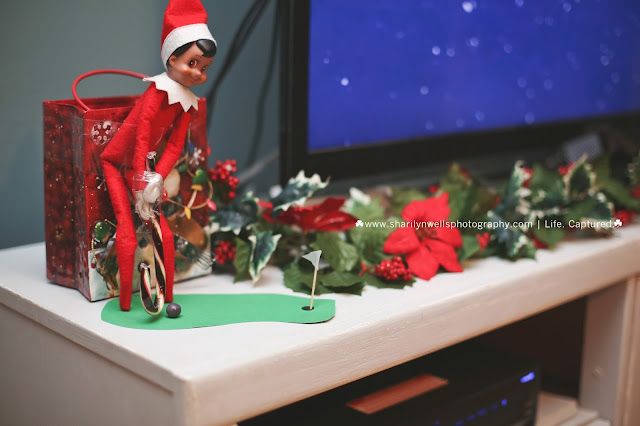 The next night Raheem was caught playing golf (something my eldest loves!) and the next next night he did something for me ... he was my coffee barista! <3

Hope these give you mommas (and Dads) out there some ideas for the boys in your lives. I know it's hard to not make the elf .... too girlie (I know, I know, gender roles should be broken, blah blah blah .... but I have a boy's boy and I want our elf to be a "norm" for my boys.)

Good luck out there guys! Only a few more days till Christmas and this pesky little guy will leave and you won't have to worry about moving him until next year! ;)

** Please remember that all images are copyrighted to Sharilyn Wells Photography, LLC. Please do not copy or alter any images without SWP, LLC consent. **

Posted by Sharilyn Wells at 11:45 AM No comments: