This photo challenge made me think really hard. Today's challenge: Bad habit. I thought real hard about something that I needed to work on. I came up with certain habits that needed to be changed, but didn't think of them as bad. I have quirks, just like anyone ... but bad habits? Ha ... never.

So I decided to ask my husband if I had any habits that annoyed him and he looked at me funny. I don't know if he was just being nice or actually being honest, but he couldn't think of anything. Man, you gotta love a guy like that.

Then it hit me ... literally. I picked up the remote to our Number Bed and a used tissue came with it, flew right into my chest. I realized that I leave used tissues EVERYWHERE. I know, it's gross. But tissues can be used more than once. Don't look at me like that, they can! LOL. 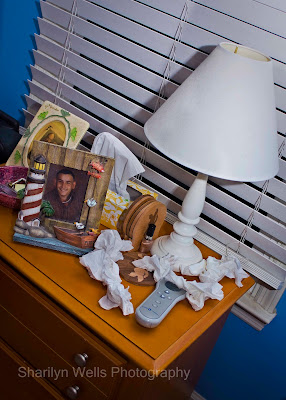 Just look at my night stand ... not a pretty situation. In fact, you could say it's a snotty one. Ha! See there? I made a funny. Well, after seeing this — I realized that I also had tissues on the side table next to our living room couch, next to the computer and in my side door pockets in my car ... It is time to stop this bad habit. And just so you know, all the tissues have been put in the trash can where they belong and I plan on working on this bad habit.
Below is an outtake from yesterday's challenge. I told you guys, it's hard taking a picture blowing a bubble and not look like a crazy person! 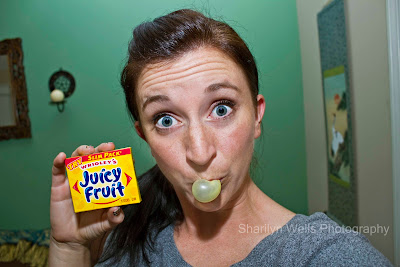 Posted by Sharilyn Wells at 9:42 PM