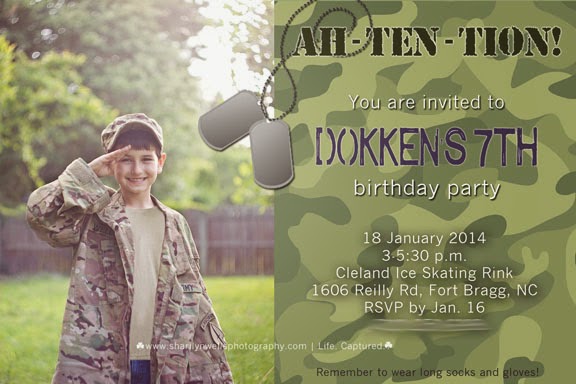 So, as I prepare to get my littlest's first birthday party rolling ... I realized I needed to blog my eldest's 7th birthday party. I mean, shoot ... he's only going to be 8 in FOUR months! (this blog has been back dated so as not to throw off my blog time lines!) haha! I find that personal images get pushed to the side in editing when I have paying clients waiting for their images. I really need to get better at not waiting so long in editing my OWN images so that I too can smile and remember my memories! 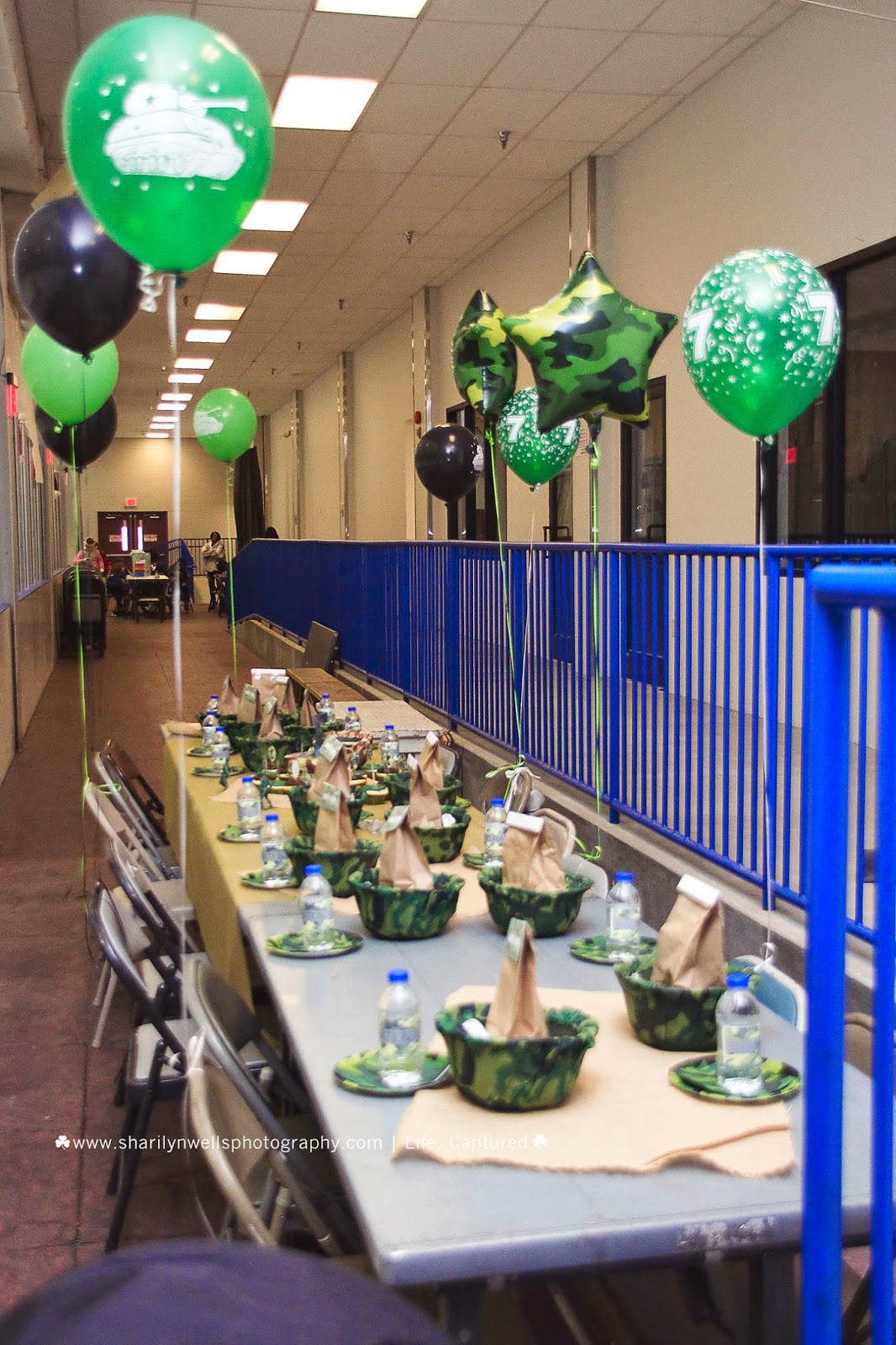 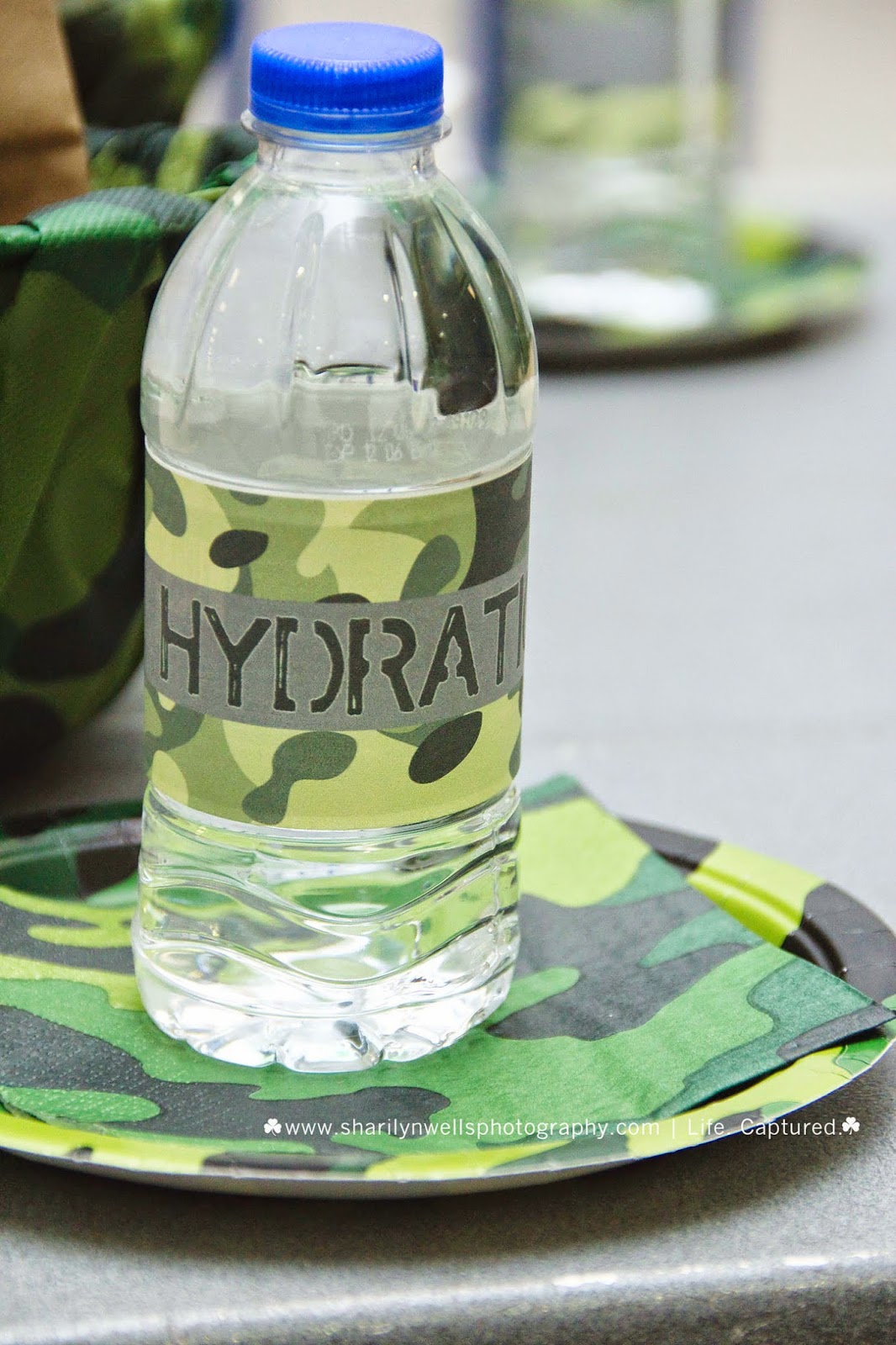 My son is all about the military. I mean, can you blame him? Both Great Grandads are Vets, two of his grandparents are Vets, and then there's of course my husband and myself ... we're service members as well! Of course my son wants to join the military and become a "military police cop." 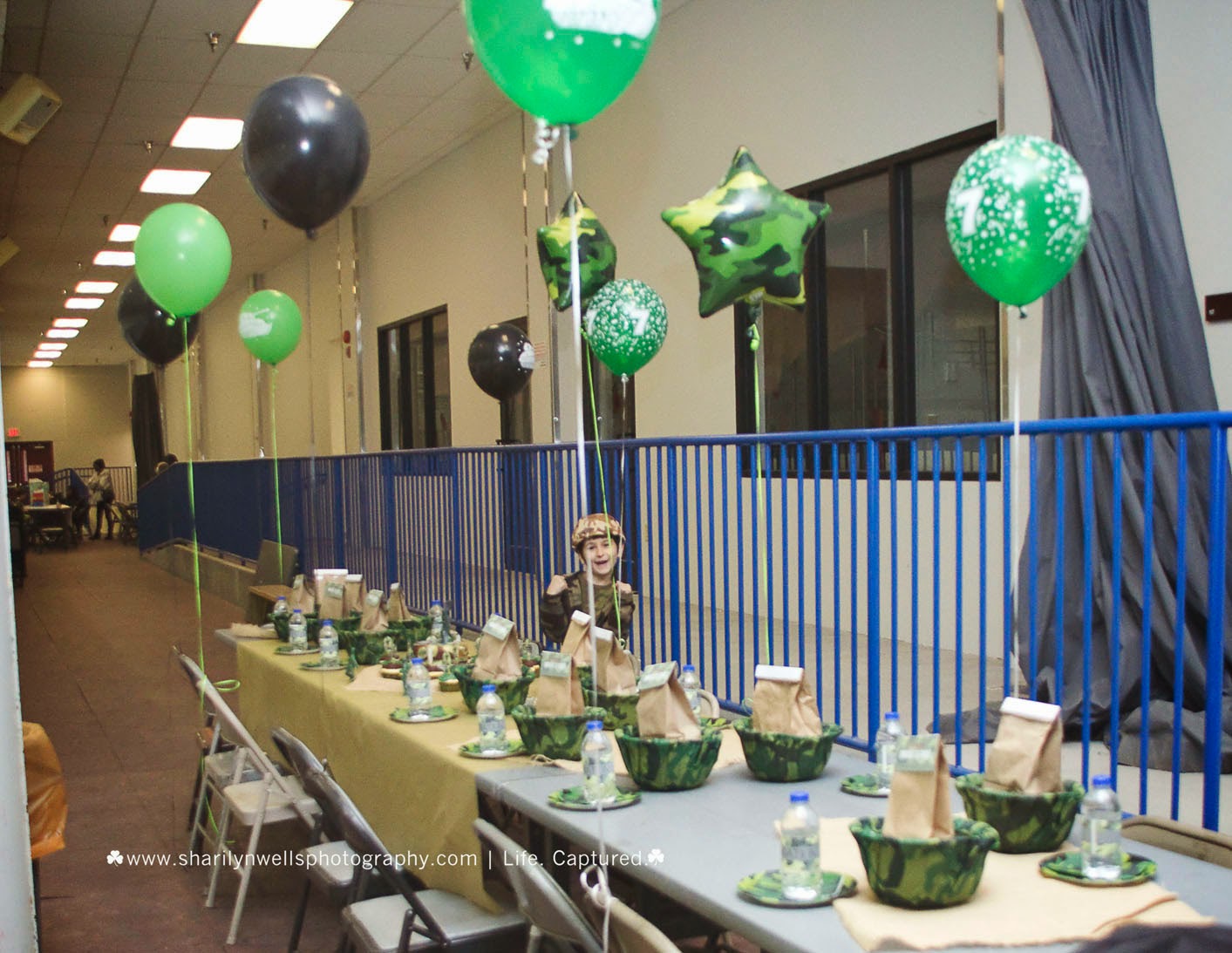 This year's birthday theme went the camo route. No superheroes this year (though he wanted to throw Captain America in the cake because "he's a soldier too!") Haha! I love my boy! 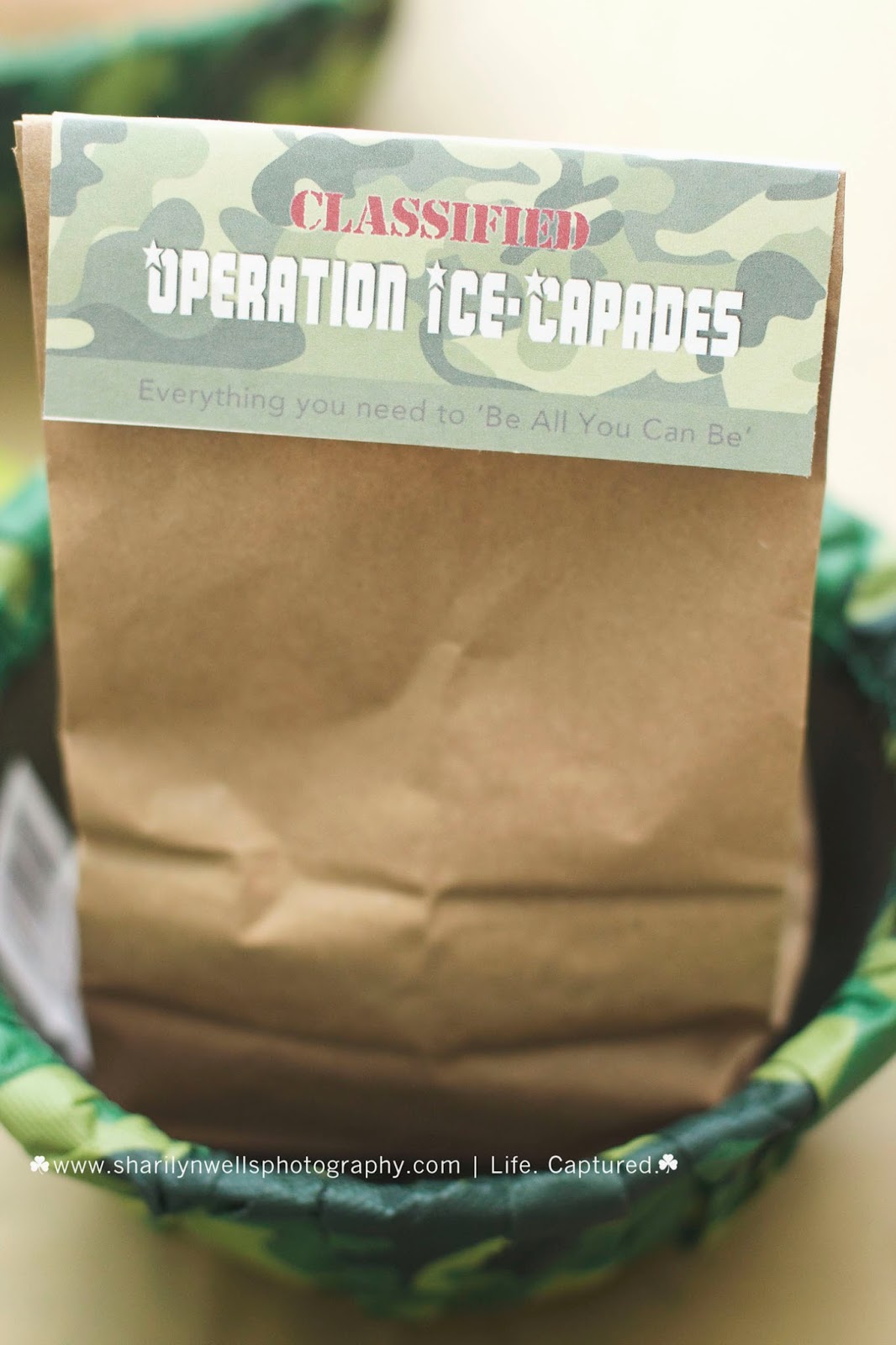 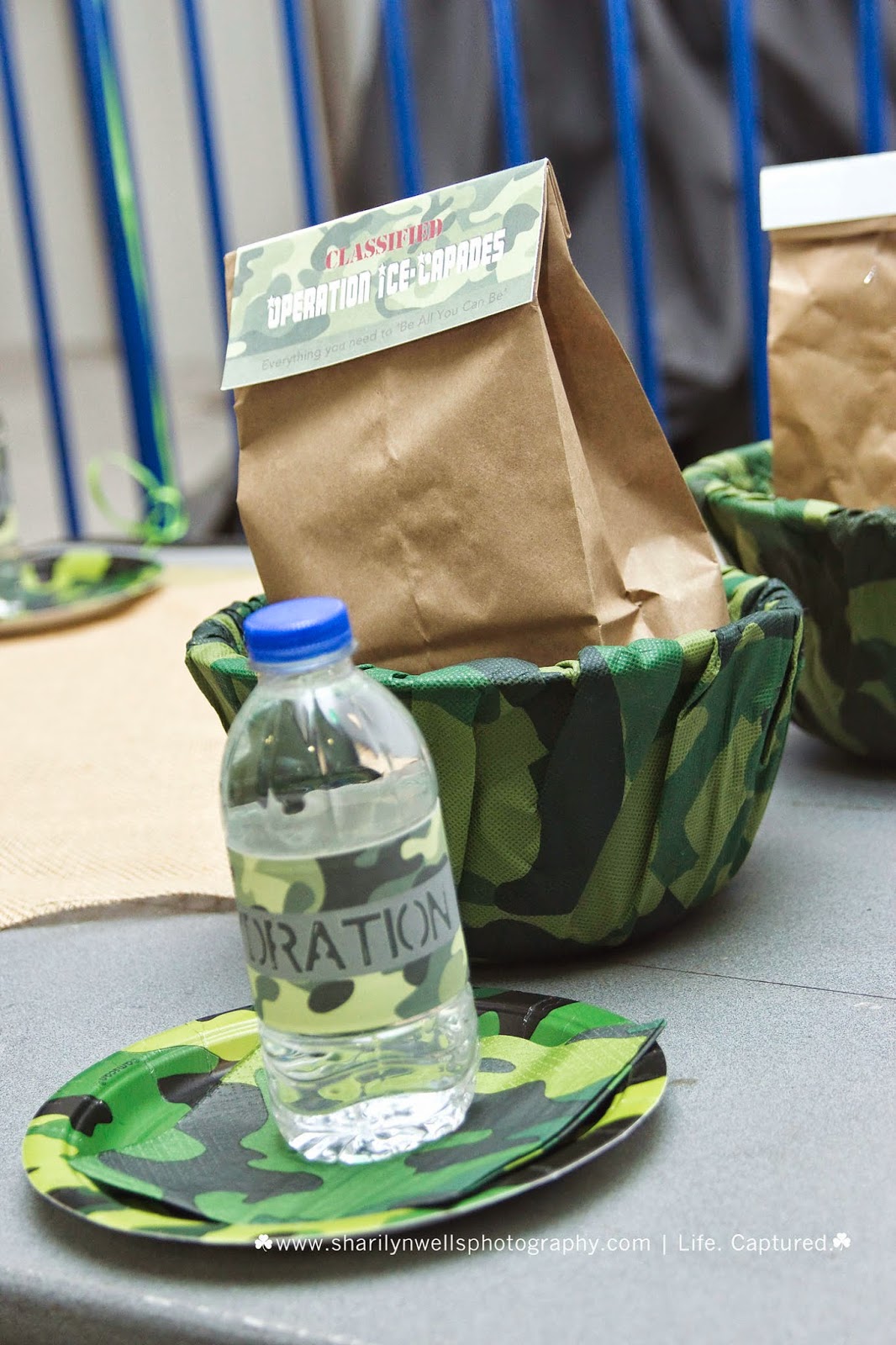 We also decided to do something way different as well ... go ice skating! Being in the South, not many children (or adults for that matter) haven't ice skated before or it has been YEARS since they had. Fort Bragg has an awesome (and the only) "public" indoor ice skating rink. My son learned to skate around 4 years old here and has loved it ever since ... even though his hopes of being a hockey player shattered when he found out he had to wear lots of heavy protective gear. (My skinny lil' boy would probably curl up in the fetal position during games!) But that doesn't stop us from being huge hockey fans!! ;-) 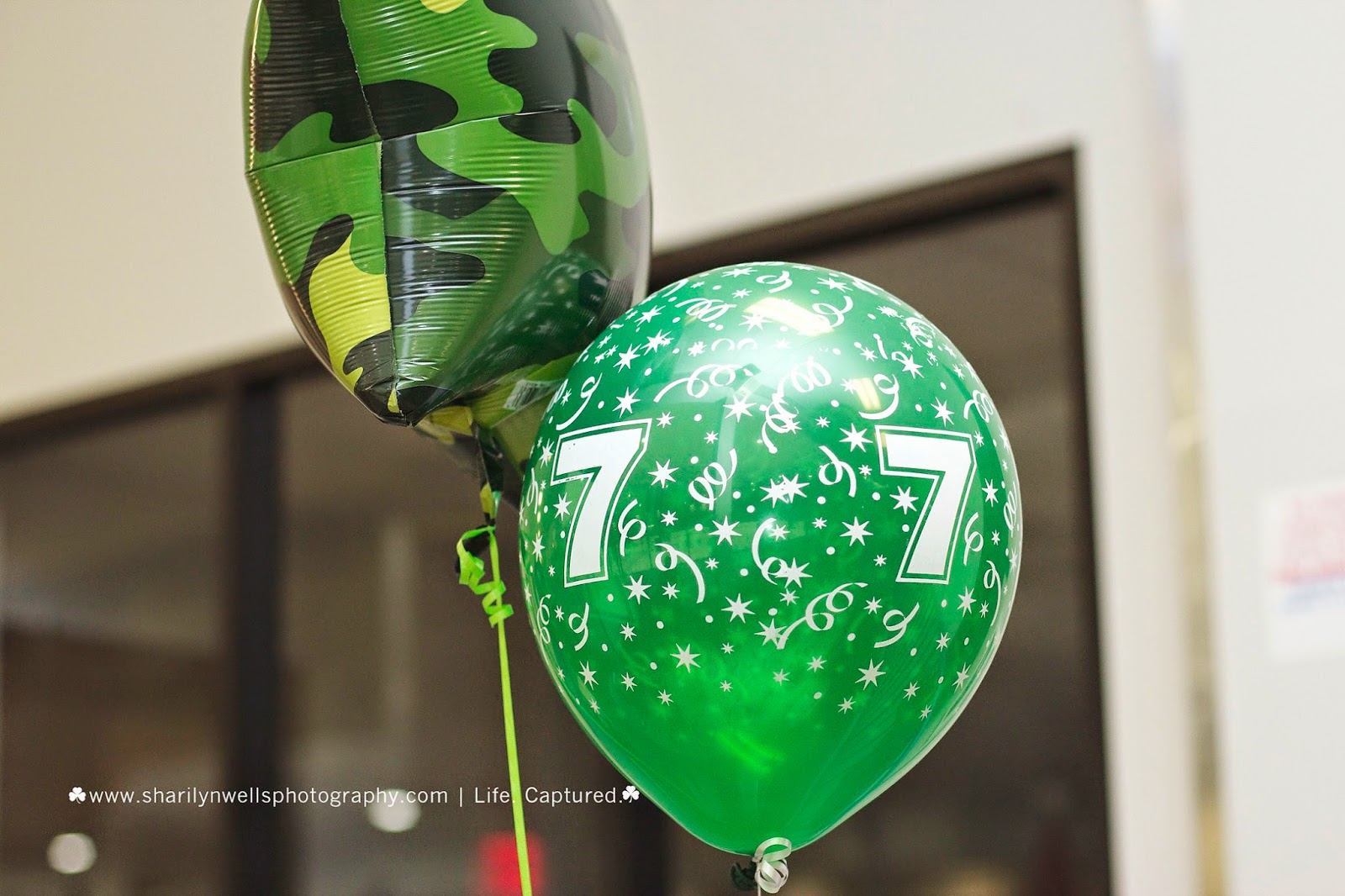 Being the mom I am, I wanted to do everything myself. (God help me with my littlest's party!) I found cheap camp plates and napkins at Party City and used a plain brown plastic table cloth. I also used burlap to add a lil' army flair to the table set up. I grabbed camo balloons and mixed it up with green "7" balloons and plain green and black balloons.

I was going to get the cheap lil' army helmets from Party City as well but they were flimsy and when I found these much more sturdy hard plastic covered with fabric at the Dollar Tree ... I knew which one would be better! (And cheaper believe it or not! ... 11 hats = $11) Not bad at all.

See, my goal here was to have one of those gorgeous parties that you read on party planning blogs ... but for under $300. 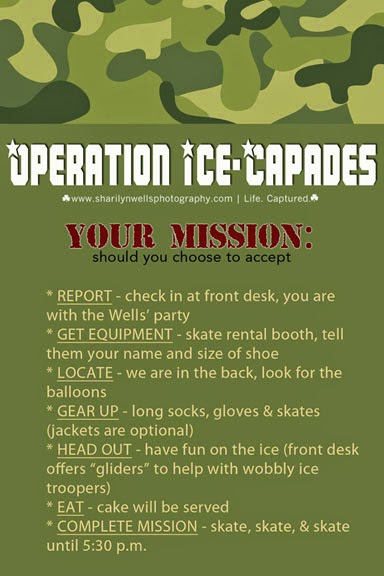 I made party goodie bags outta brown sack lunch bags and filled them with lil' army trinkets and goodies. I printed off the thank you cards (bottom of this blog), the goodie bag design and water bottle "hydration" labels from my computer. I found a free camo background, free army styled lettering and made them all myself. Did you know Pinterst also has a way for you to search water bottle label dimensions?! Yup! Pretty cool right?! 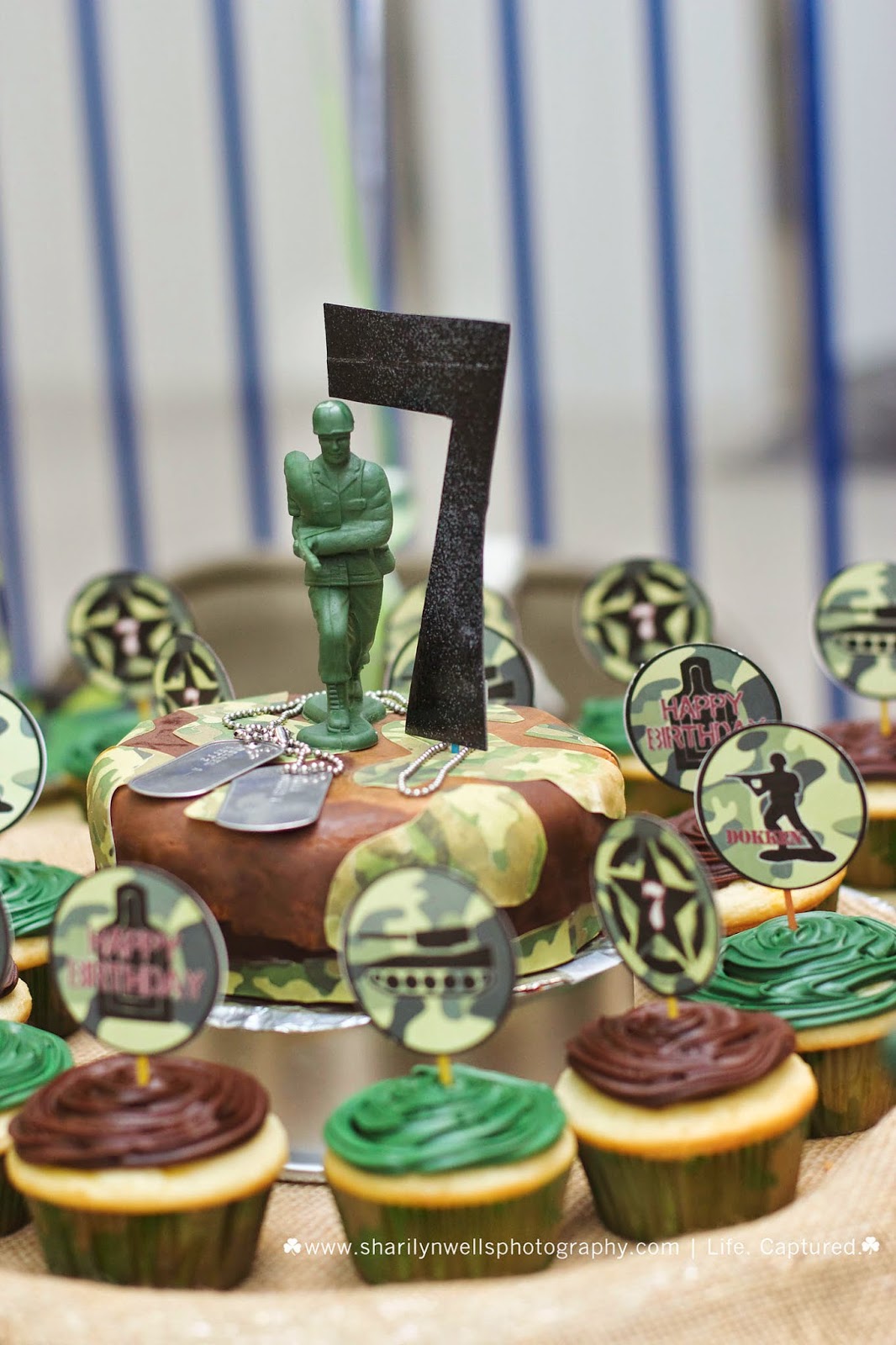 I also made lil' "orders that the front desk handed out to party guests to help them know where we were in the building and what they needed to do! ;-) Just a fun lil' addition to the experience. 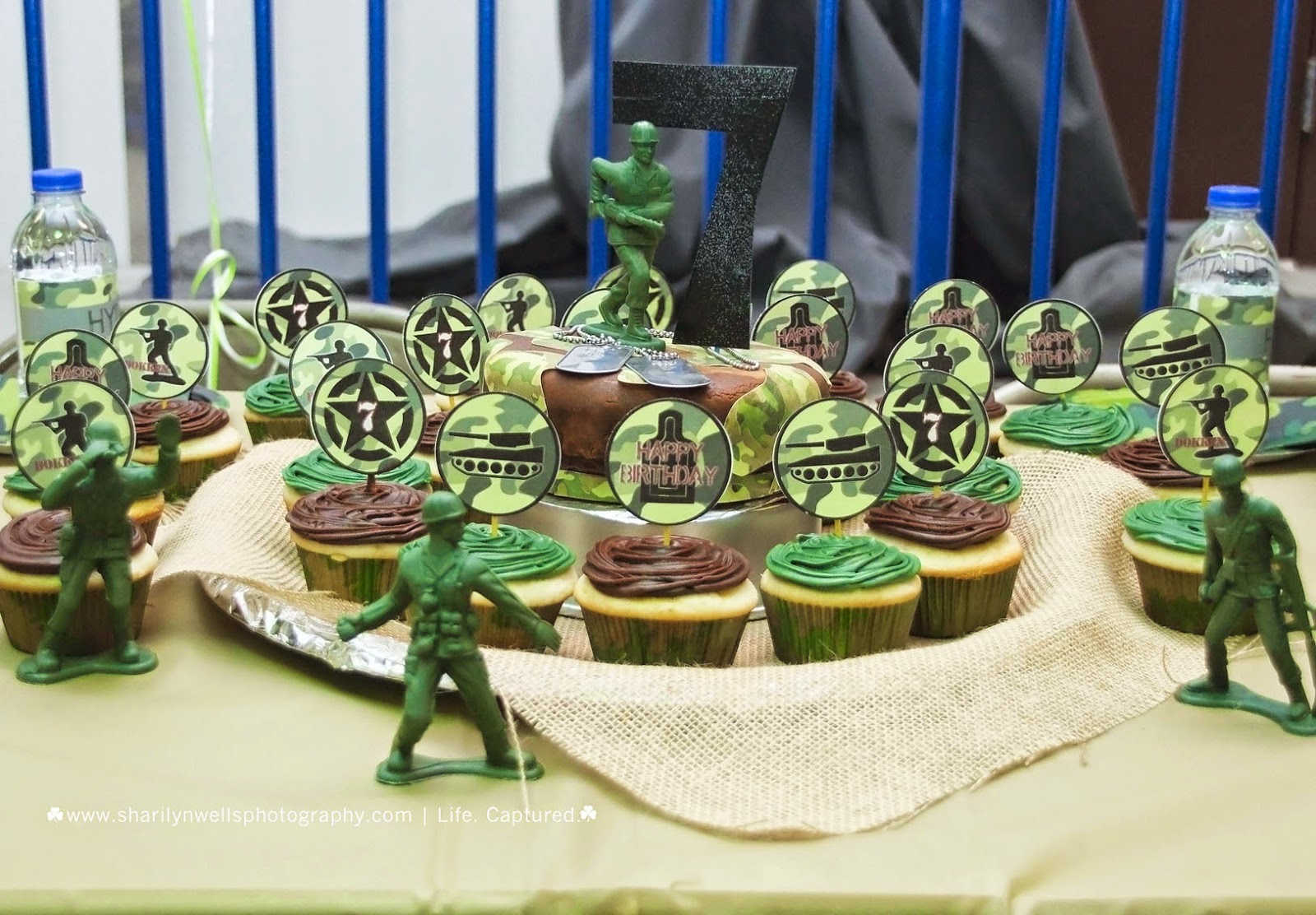 It's basically tradition now that I make the cakes for my son ... now SONS. :-) The only cakes I didn't make for my eldest was his first and second... all others ...all me. So, of course I had to make this one. With Pinterest inspiration ... I came up with one small cake and cupcakes for the other children. 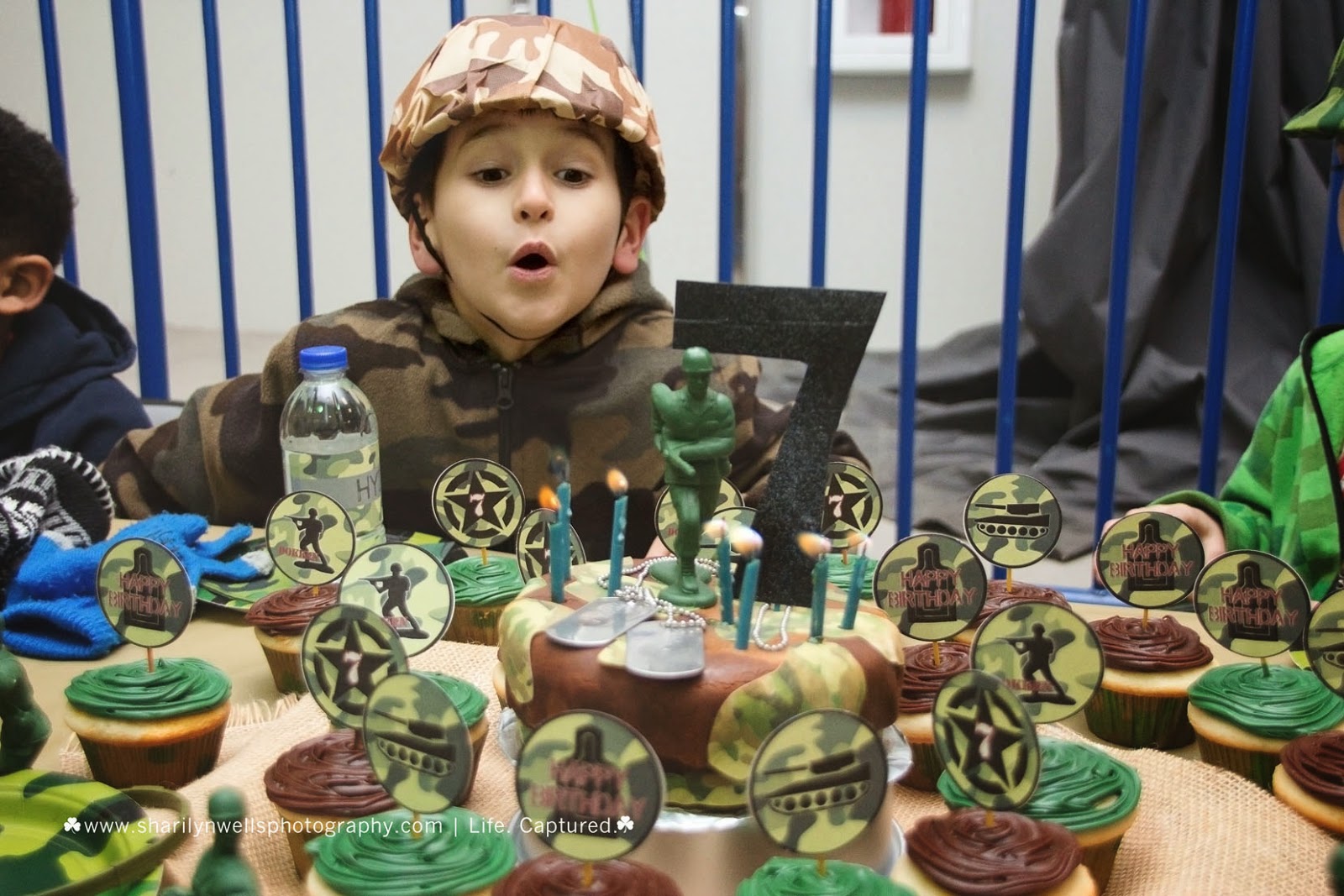 Those cute cupcake toppers? My design.  I made them on 2inch circles (big enough for my circle scrapbook hole punch) and taped them to toothpicks! It's amazing what sort of FREE graphics you find on Google! I also found HUGE army men, so my son's favorite from the bunch went on top as a cake topper as well as a huge cardboard seven spray painted black. My husband made dog tags for my son a while back because he always saw us wearing them in uniform and he wanted a set for himself ... so why not put those on top too?! 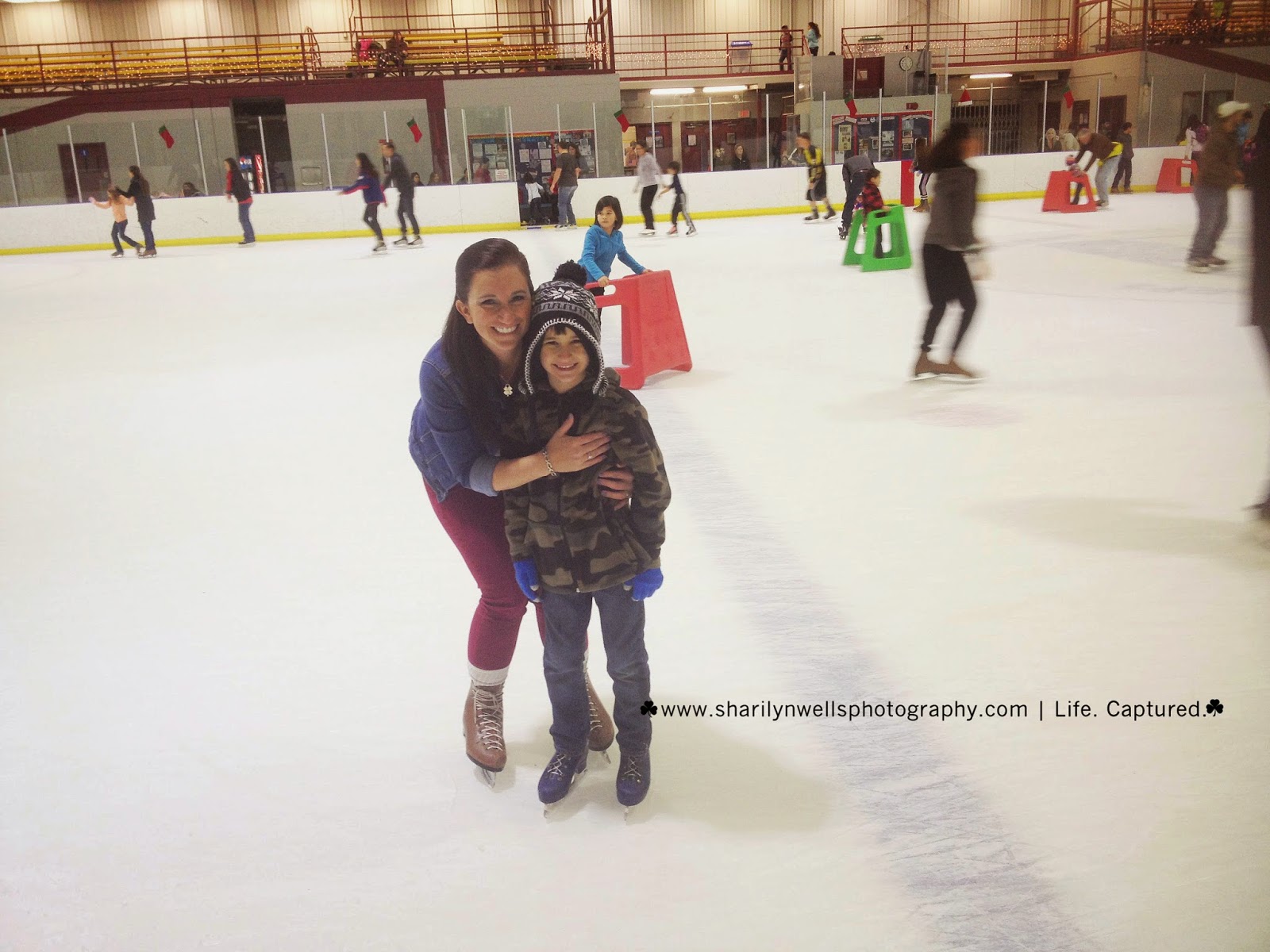 Only thing I missed? Having one of my 4 photographer guests/friends take pictures of my son and I on the ice rink or even in the party pics at all! We didn't get a family shot at all until we were loading up the car to leave and we selfied it up in the parking lot ... notice how none of THOSE pictures are on this blog! ;-) People, hire a photographer for your events! It takes the stress off of you and you can relax. I was running around making sure the party was going smoothly, the guests were having fun, snapping pictures and oh yeah, wanting to skate with my boy! (the above picture is an iPhone pic!) 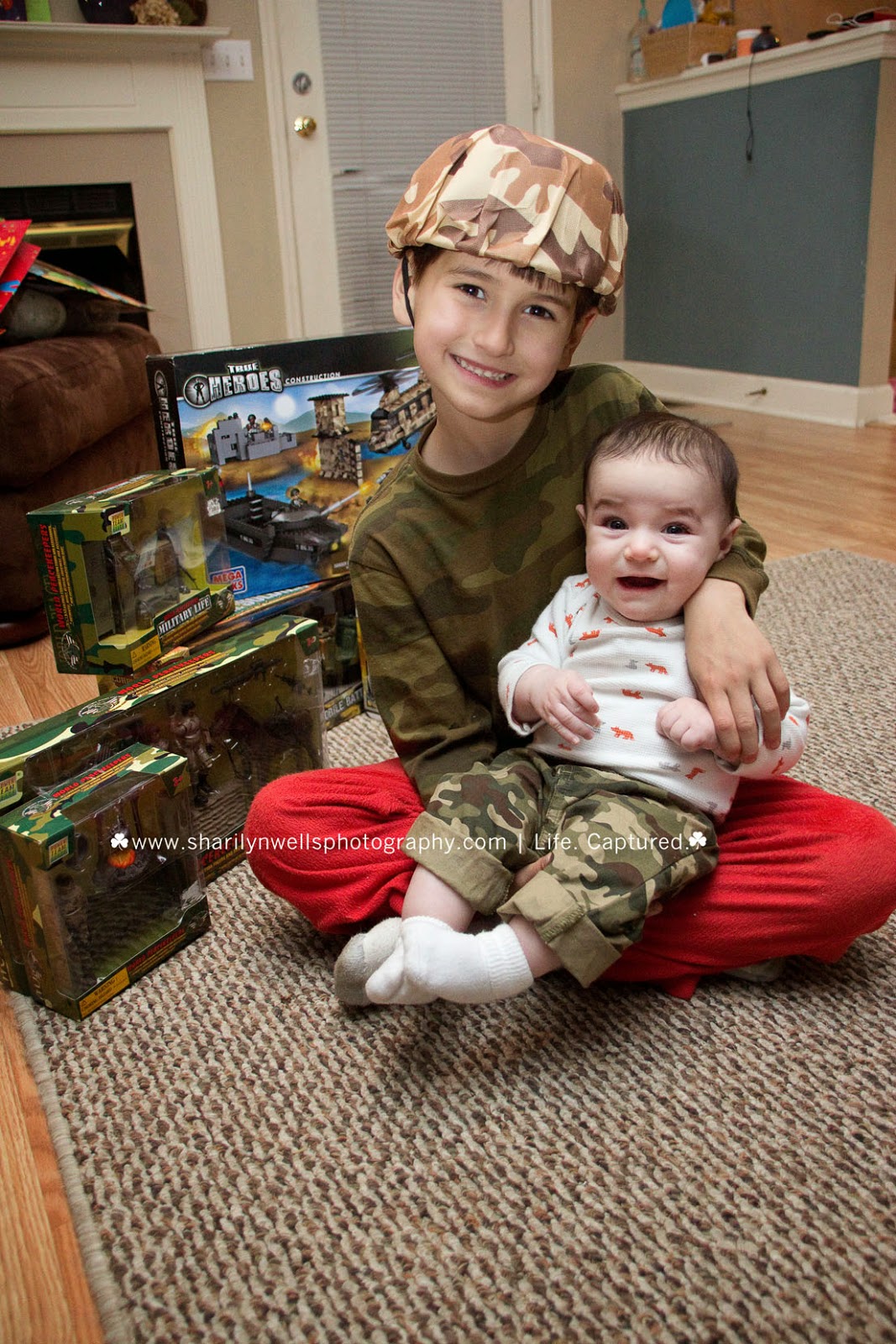 At home my son opened all his presents ... apparently every one knows my son well. All gifts were military themed or gift cards for his Nook. ;-) He made out like a bandit even though I said no gifts were necessary ... he's got so much stuff as is! 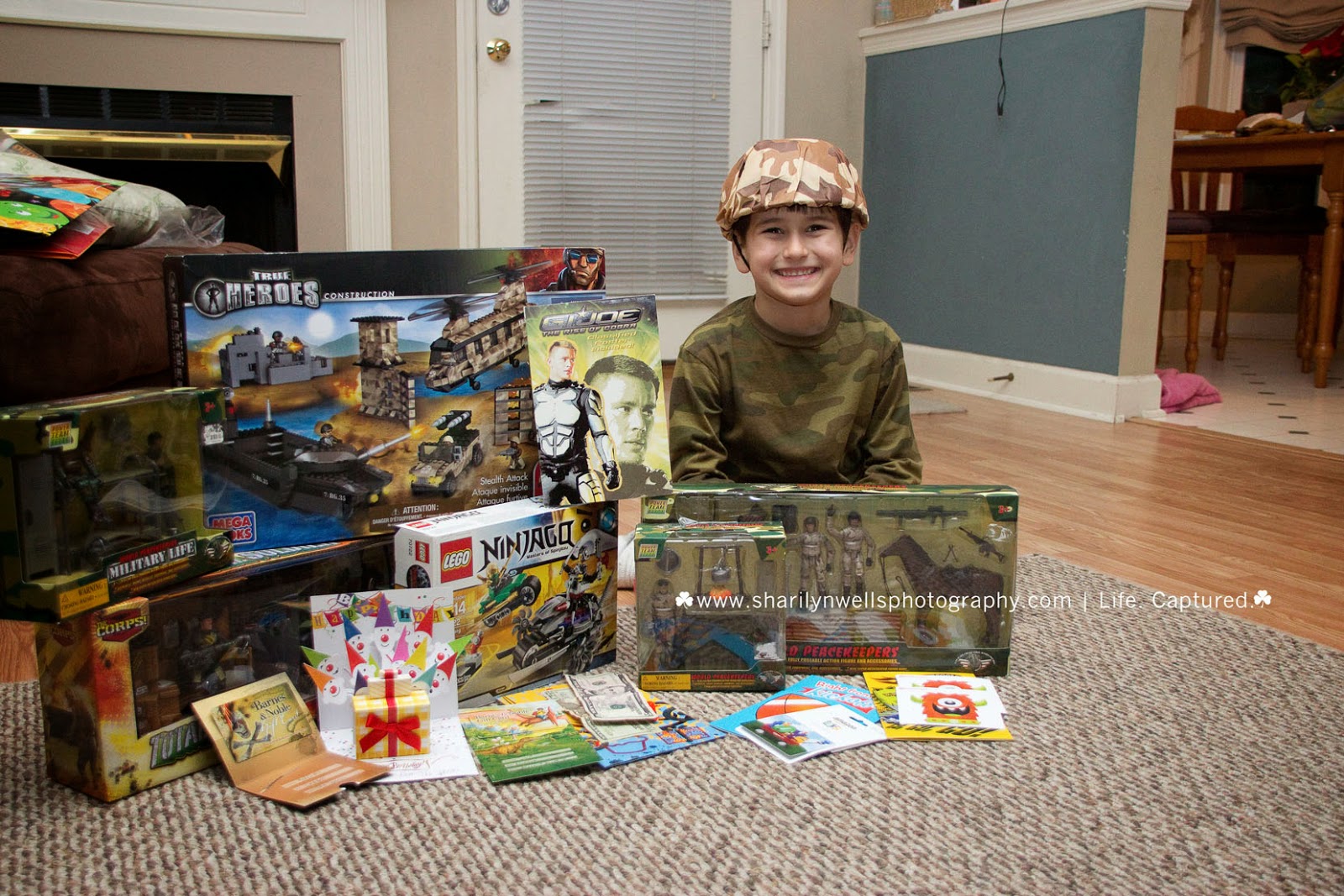 But he sure did enjoy himself and the gifts, he slept like a rock that night! ... helmet and all. 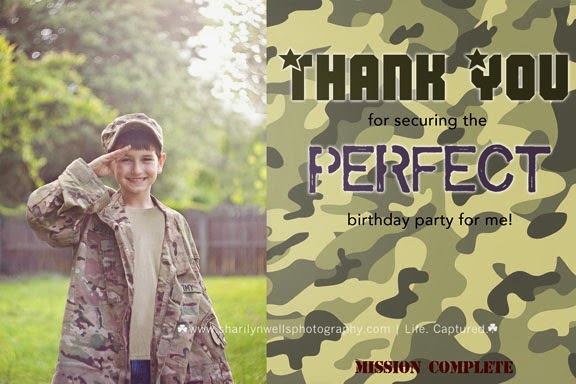 Grand total for the party was just a TAD over $300 only because we paid for myself to ice skate as well as two extra kids. The biggest expense was the venue, decor and cake (since I didn't feed the kids, just sugar ...) was no more than $175. I think I did pretty good! Now to see what I finagle with the littlest's party! ;-)

What is the going rate now-a-days for birthday parties? (Update: after Googling this question, the consensus is between $200 -$400!! Crazy right? I mean, there are exceptions. Some people claim to only spend $100 or less ... home parties with cake and no decorations, or very little. Other's have claimed to spend over $1000! On just a regular party! This isn't your Sweet 16 we are talking about now, just your regular, run of the mill party. But here's the thing, everyone who saved a buck, did the majority of the hard work. THAT'S the key to saving money. A lil' hard work pays off!)

Some prep work ... Instagram photos! All goodies came from Dollar Tree and most were in multi-packs so I was able to pull apart the packaging and take care of two kids with one play pack of army goodies! ;-) Water was Sams Choice. Carmel popcorn, two boxes and broke down into plastic baggies  to put inside the goodie bags. I stayed away from candy, as I know how my child acts with sweets ... soooo ... didn't want to spread the hyperness. haha! 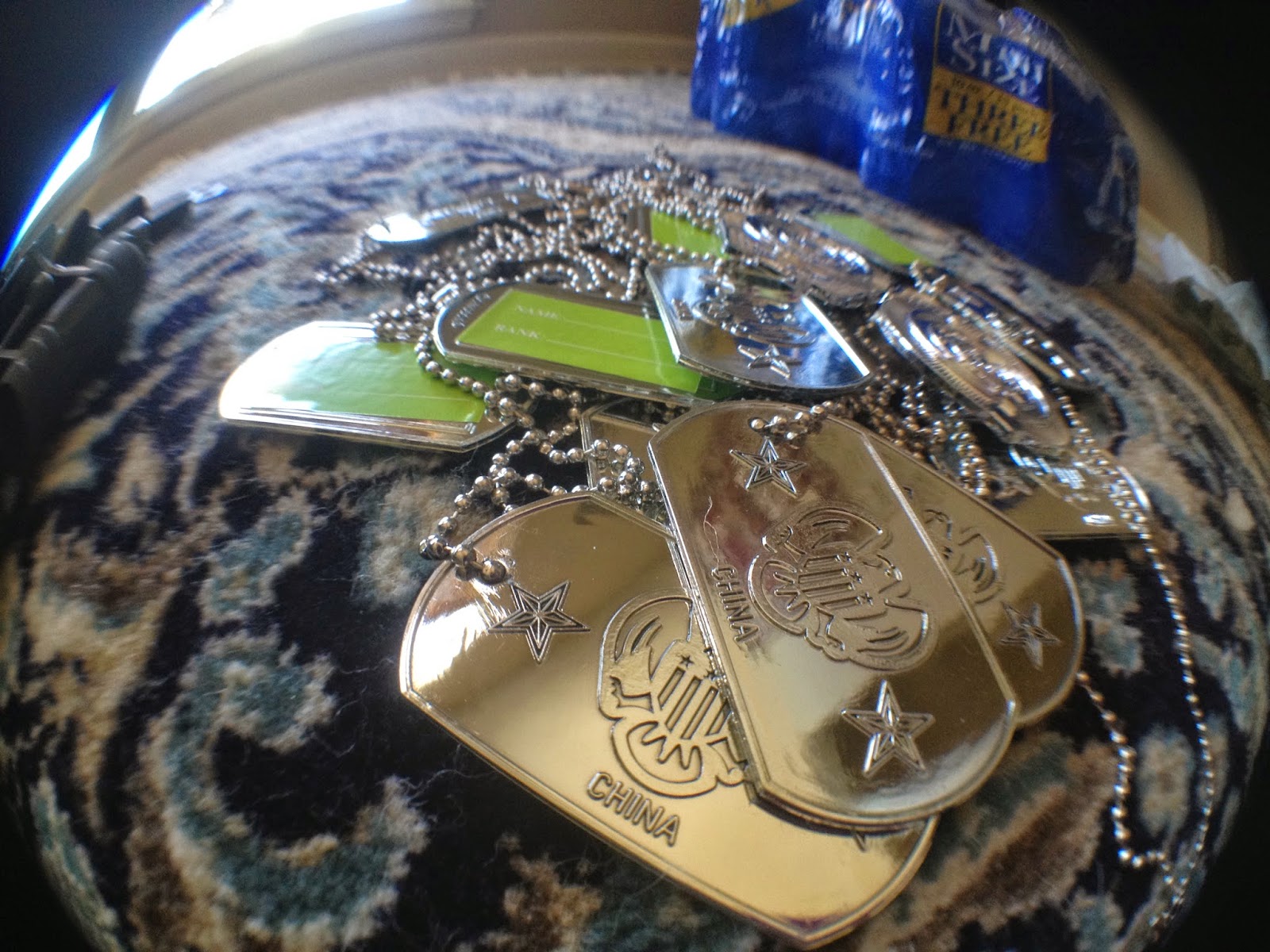 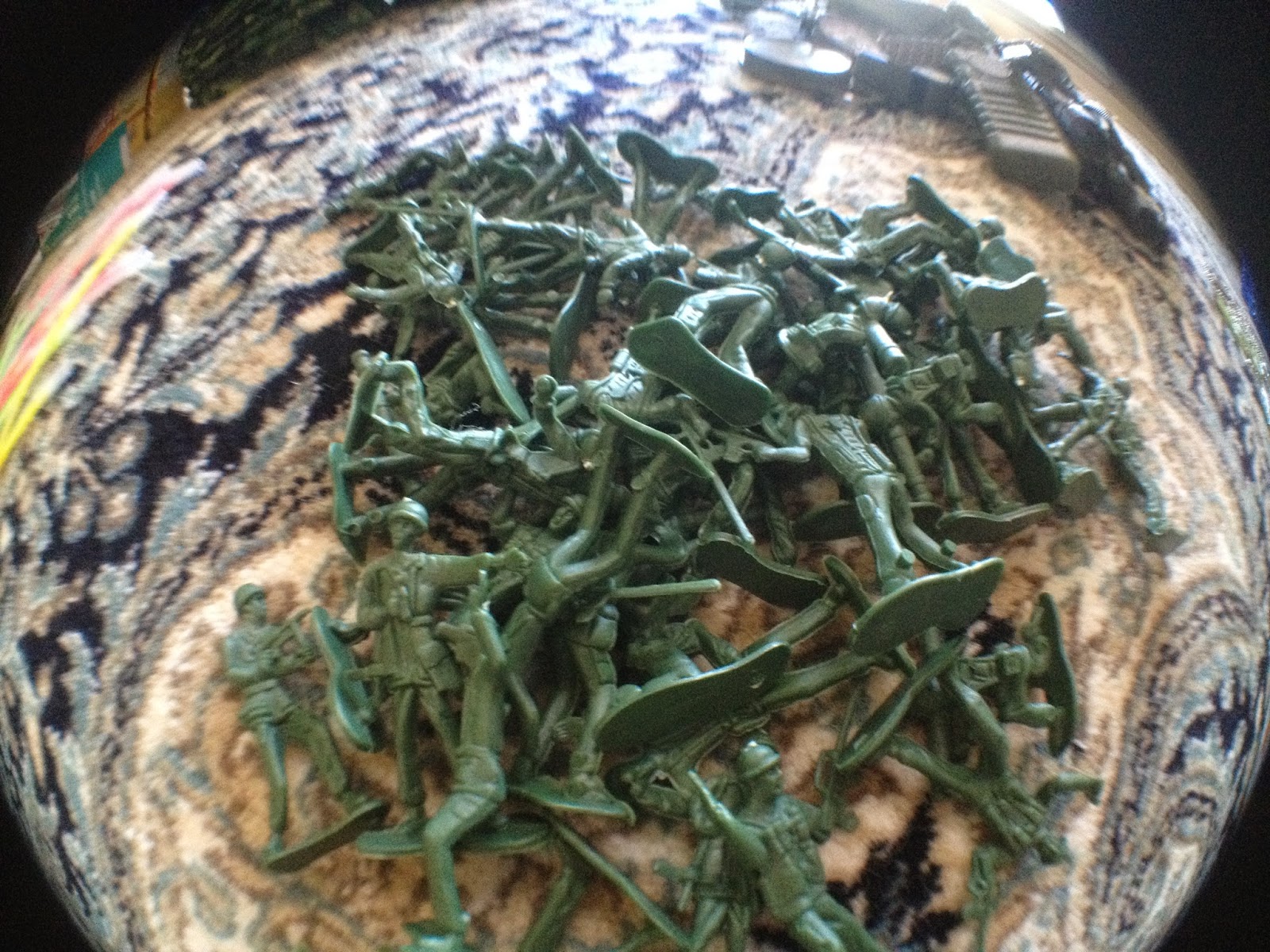 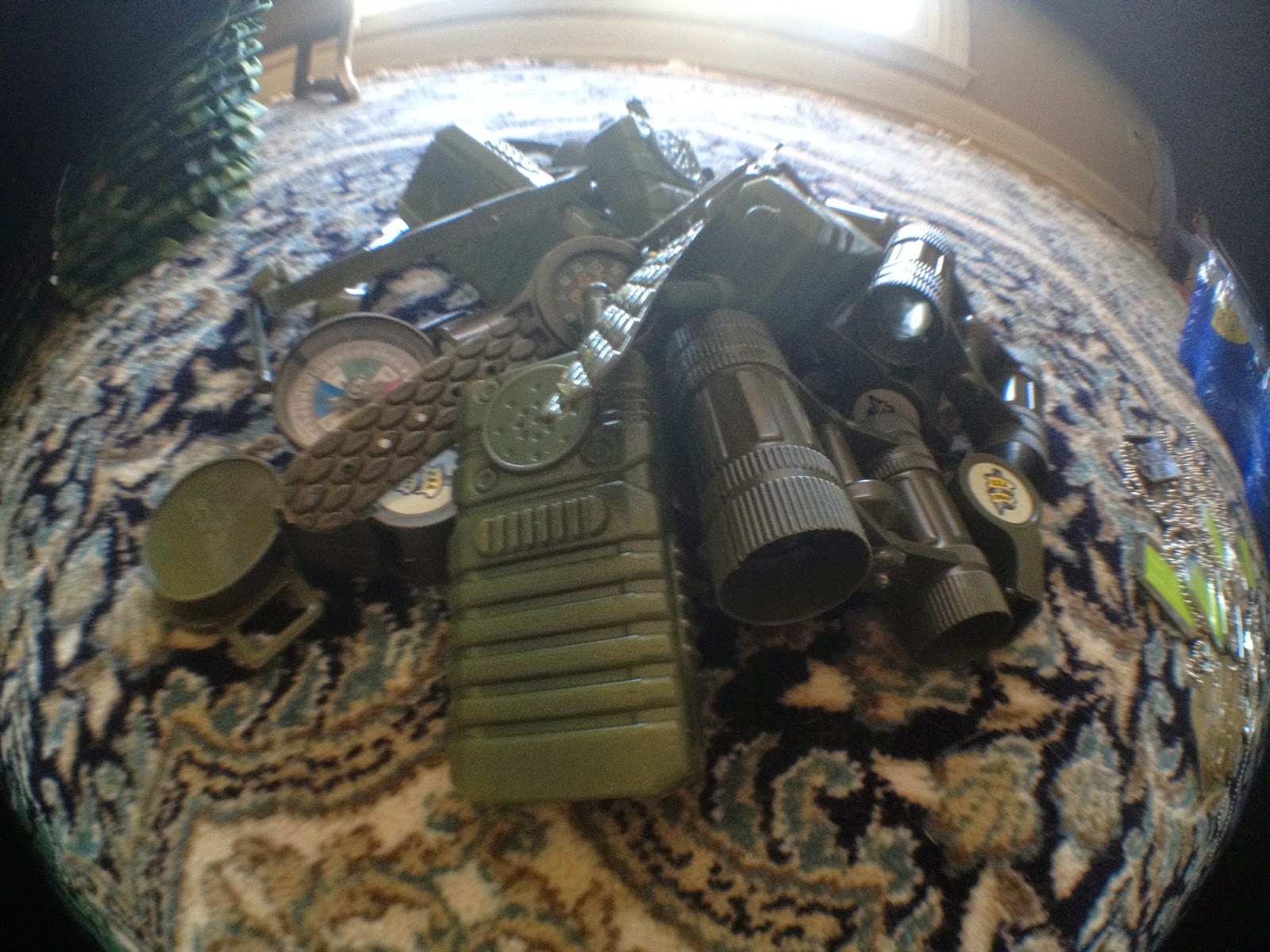 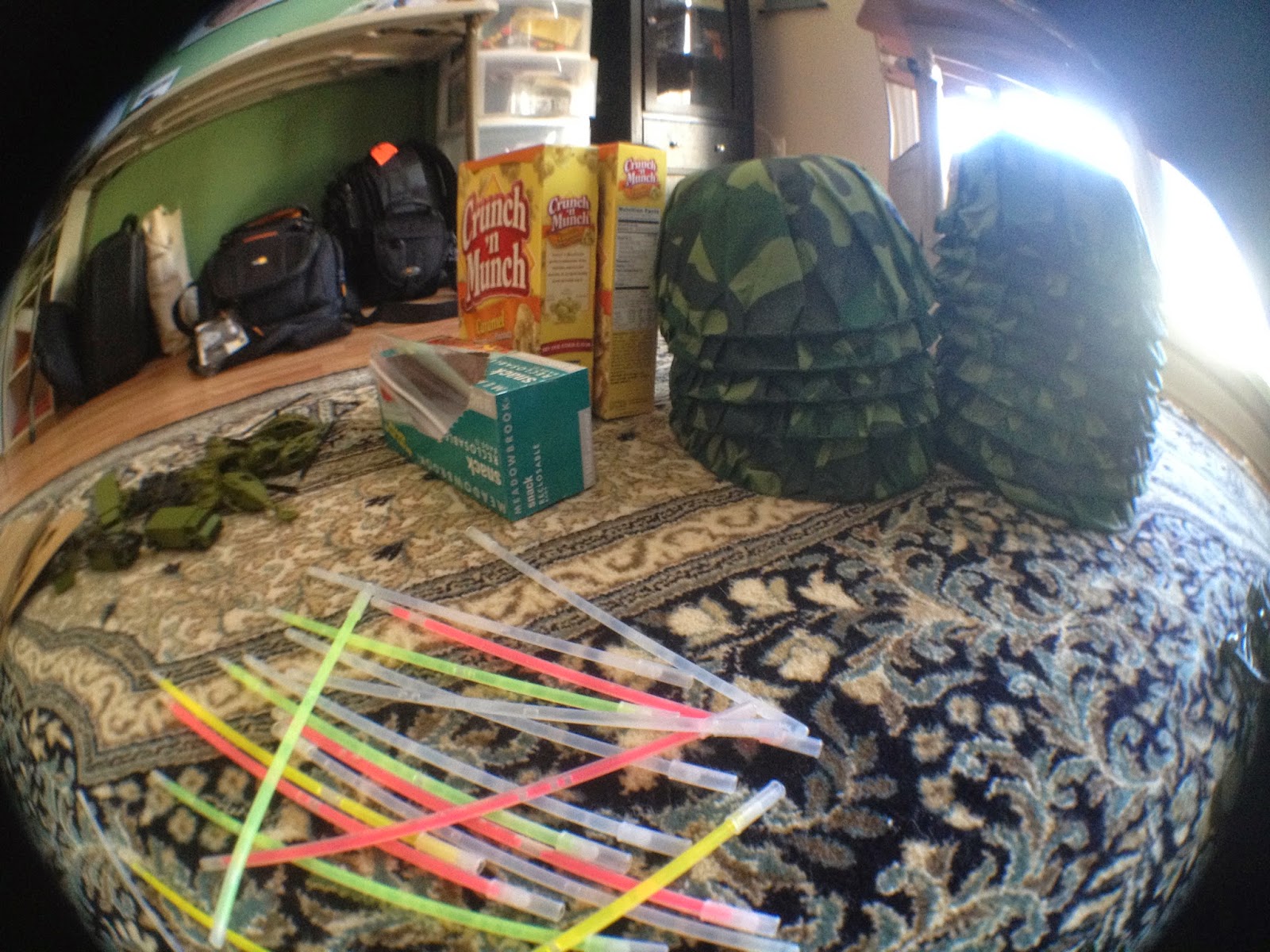 ** Please remember that all images are copyrighted to Sharilyn Wells Photography, LLC. Please do not copy or alter any images without SWP, LLC consent. ***