I dunno if you guys know this or not, but my son LOVES anything superheroes. But he especially love the Avengers. He's loved every movie that came out before the movie as well, his favorite being Captain America (which so happens to mine too). But ever since the Avengers came out, he is starting to lean towards Hawkeye. Why? I don't know. Hawkeye isn't even that prevalent in the movie, and half the movie he's a bad guy. I dunno, it has to be the fact that he has a sweet bow with amazing arrows. It has to be.

Anyway, my son has every Avenger toy imaginable (minus a Hawkeye costume, which isn't made in stores, which means I'm going to have to get creative). He loves dressing up in both of his Captain America Halloween costumes — sometimes both at the same time. Why does he have two Capt. A costumes? Well, see, I refuse to buy store bought Halloween costumes. In my opinion, they're cheap, cheesy, and chintzy. So, I bribed persuaded my son to dress as the WWII Capt. A from the movie for trick or treating (and costume contests) and he could wear the store bought one to daycare. I lucked out and he agreed. Well, months later, he's still playing with both costumes. I loves dressing up. But to my defense on the 3C comment about store bought costumes, it is cheesy and it is falling apart. The costume I made him ... is in perfect condition (minus the wear and tear of him LOVING it so much). Just saying.

Wow, I'm getting off subject a lot here. Back to why I'm posting a blog! Last night, as I was going in his room to check on him before I headed to bed (and give him a kiss on the cheek - a nightly tradition), I almost killed myself tripping over his toys next to his bed. You see, he isn't allowed toys in the bed at night, so he "secretly" plays with them on the carpet as he leans over the bed. I noticed that everything surrounding him, minus his Wall-E comforter, was superheroes. I smiled and thought, "Oh how cute, even superheroes have to sleep sometime." Thus, my picture below! :-) 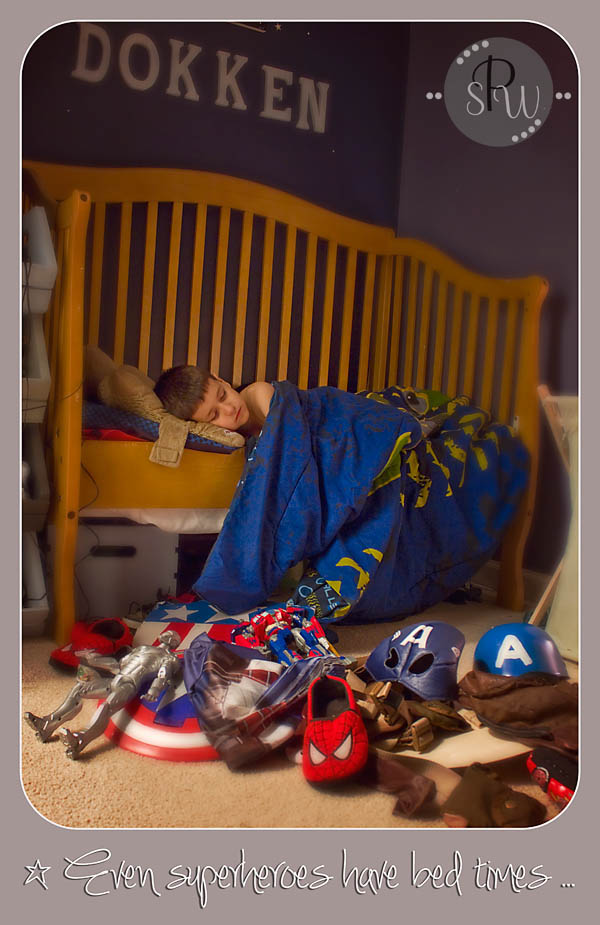 He's a cutie, isn't he? Just for fun, lemme post other superhero themed shoots (and personal family photos) I've gotten of him! 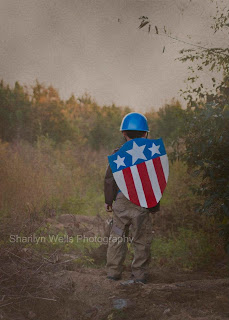 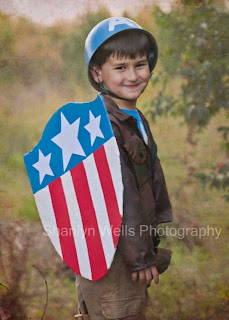 Here is his costume that I made for Halloween. He LOVED it, and I'm glad cause after all, I did bribe persuade him. 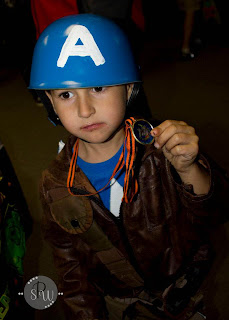 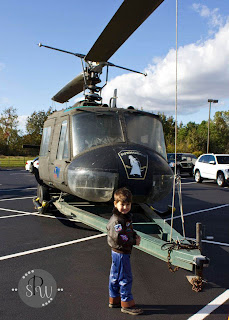 He looks so happy for winning the costume contest doesn't he? "Look ma, I got a medal. Cool." LOL Also, we got lucky enough to see a helicopter in one of the car lots here in October. I mean, how cool is that? He even say the sticker and said, "Mom! Avengers! It's the Avengers' helicopter!" I played along, ;-) 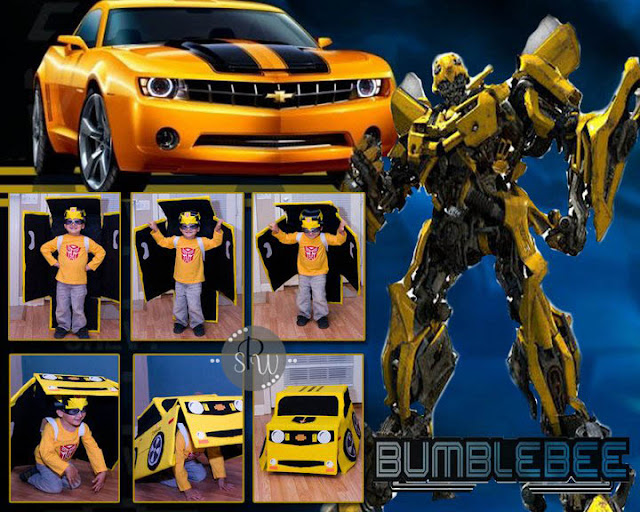 I guess Bumblebee could be considered a superhero, right? When Dok was 3, he wanted to be Bumblebee. I've made his costume every year ... and I thought that year was going to be the year I broke down and bought a store costume. How the heck was I going to make a Bumblebee costume, "that transforms," my son said? Well, after almost breaking down four or five times at Walmart, and some A LOT or internet research, I figured out how to make a transforming Bumblebee Halloween costume. And can you believe it, he came in THIRD place at a Swampdogs (local baseball team) game. THIRD PLACE?! Boo, to that. But, winning isn't everything right? (sorta). He loved the costume and everyone who saw him in his costume and transform, loved it. It was a success. 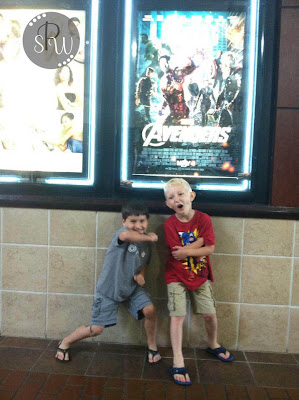 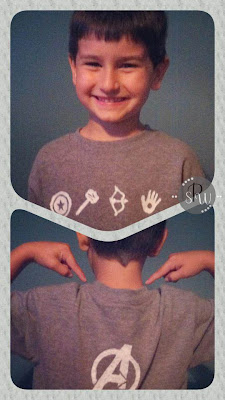 Well, for the opening of The Avengers, we went to the movie with our neighbors, who were just as excited as us. And I even made a T-Shirt for Dokken. Tutorial from the wonderful blog, I am Moma Hear me Roar, is HERE. 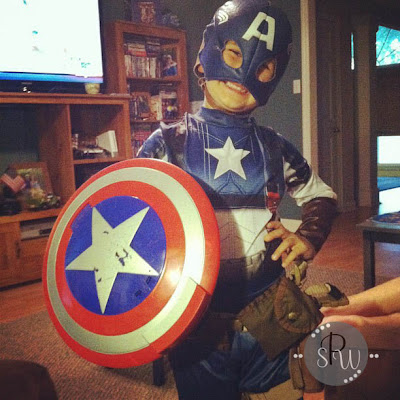 Last but not least, we had a fellow photographer, Amber, from Amber Fite Photography, take some family photos of us. And our outfits of choice? None other than the Avengers! 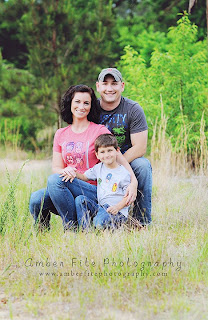 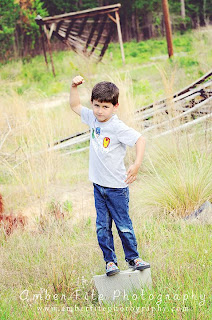 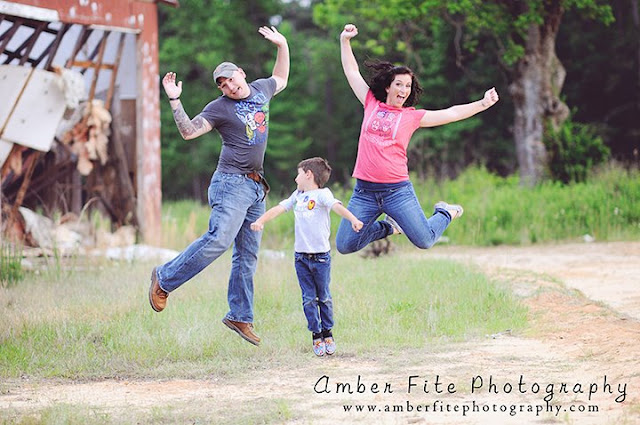 Thank you for stopping by!!! Be sure to check back on the blog periodically for updates, specials, and image sharing!!!

*** Please remember that all images are copyrighted to Sharilyn Wells Photography, LLC. Please do not copy or alter any images without SWP, LLC consent. ***

Posted by Sharilyn Wells at 1:30 PM